⚠ Coachella Festival 2020 postponed due to coronavirus ⚠

The 2020 Coachella Music & Arts Festival is the latest major event to be disrupted by the global coronavirus outbreak.

Billboard reports Coachella will be postponed from April 10-12 and April 17-19 to two weekends in the fall, tentatively on Oct. 9-11 and Oct. 16-18. Organizers expect to know if the plan to move the Indio, California, music festival -- attended by roughly 250,000 people annually -- is doable within 48 hours.

“As of now, the same lineup is confirmed to perform,” reporter Yashar Ali said.

The 2020 Coachella lineup is scheduled to be headlined by Rage Against the Machine, Travis Scott and Frank Ocean. Other performers include Calvin Harris, Thom Yorke, Lana Del Rey, Fatboy Slim, Run the Jewels and Megan Thee Stallion.

Rolling Stone reports at least six cases of coronavirus have been confirmed in Riverside County, including three in Coachella Valley, where the festival takes place. The Riverside County Public Health Department declared a public health emergency on Monday and canceled the area’s BNP Paribas tennis tournament, which draws up to 450,000 attendees.

An official announcement about the festival has not been made yet. According to Pitchfork, Coachella has taken place in April every year since 2001; the inaugural festival was held in October 1999. As the moon comes up, the desert air cools off the crowd and the music turns up loud. Lights dance upon the palm trees and music lovers dance upon the grass. Everyone focuses on their friends and ... ⚠️ no clubbing and festival for Ibiza in 2020, due to coronavirus ⚠️ 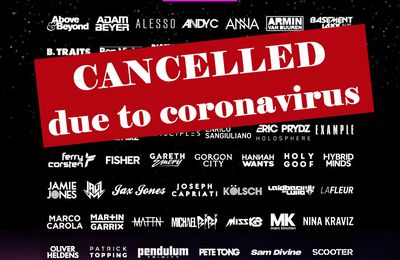