The album was nominated in the category "Best Electronic/Dance Album" at the 50th Grammy Awards.[6] In April 2007 the album moved 72,000 units according to Nielsen SoundScan. The album also received gold certifications in Belgium, Hungary, Netherlands and Romania.[7]

"I am very excited about my new album and the new single from the album called "In The Dark". It's a very experimental piece of work and combines the style of rock with trance and electronic. The vocals are done by Christian Burns who I met through MySpace. This is the first time that I have combined these different genres, I have always liked rock music so it made sense." 
Dutch trance don Tiesto has achieved more than his fair share of 'firsts' in recent times. He’s the first DJ to play the Olympics; the first to get a house record broadcast on North American daytime radio (his remix of Delerium’s “Silence”); and the first to sell out a solo stadium DJ gig to 25,000 people, two nights in a row.

He’s also the first producer in 23 years to score an instrumental number one in Holland, with his hit single “Traffic”.

It’s unsurprising, given this stream of lofty accomplishments, that Tiesto’s third album Elements Of Life is both confident and ambitious.

Following on fluently from his previous albums, Elements Of Life contains all of the tried and tested Tiesto signature sounds: namely, epic melodic trance hooks combined with melancholic introspection and moody cinematic bridges.

But there is a broader, more song-based approach evident too, underlined by the array of guest vocalists; BT, Julie Thompson, Jes, and newcomer Christian Burns among them. Further, Tiesto has opened up his sound to incorporate splashes of minimal techno, house, film soundtracks - even rock.

Lead single, “In the Dark”, arguably one of the best tracks on the album, features a searing dance-rock atmosphere topped with a superlative vocal performance from Burns. Matching this standout is another vocal track, “Sweet Things”, which combines Charlotte Martin’s sultry, soaring voice with a driving rhythm and an ecstatic techno- trance floor-slayer.

The moody, infectious Everything, featuring Motorcycle’s Jes is also top-notch.

“Do You Feel Me?” (which features the ethereal vocals of Julie Thompson) and Break My Fall (with BT), don’t hold the attention for quite so long, while the anti-AIDS campaign track “Dance4Life” (with Maxi Jazz) is derivative and sounds somehow out of place here.

The instrumentals fare worse than the vocal tracks. “Driving to Heaven” and “Bright Morning Star” are cliched and the remix of “He´s A Pirate” boasts little in the way of either charm, subtlety or originality.

Underground or unique Elements of Life is not. But, for what it’s worth, it’s as technically accomplished and accessible an album as you’d expect from one of the world’s most commercially successful DJ/producers.

His next moves are all connected to the latest addition to the Ti6sto oeuvre, Elements of Life, his third studio album, and one that will be promoted with a year-long world tour. The album extends Ti6sto's musical palette towards other territories - house, techno, German minimalism - without forsaking his trance roots or his innate ability to excavate memorable hooks. "It's just going back to basics," Ti6sto reveals. "People are so caught up in the Internet life and everything is so fast nowadays. So it's going back to the elements: earth, wind, fire, and water. Back to the old ancient elements of life from where everything comes. It's definitely deeper than the first album."

You can hear it, too. "German minimal was definitely the inspiration for some tracks on my album. I do get influenced a lot by other DJs and music styles. I think that's good; it's the only way you can keep yourself fresh. If I was still playing the same sounds as I did in 1998 then the music would have lost a lot of its charm."

While Elements of Life is a progression, it's still a Tiesto creation. He is the master of minor key symphonies; one-note basslines that stick like porridge on a toddler's bib. Sweet Things, which features Charlotte Martin on vocal duties, contains a deep house keyboard attack yet still retains that trademark sound, melancholic and yet strangely uplifting; Julie Thompson's voice soars and dives like a swallow at spring on Can You Feel Me, the musical accompaniment little more than percussion and bass; but the effect lingers. There are also established favourites, like Dance4Life his moving collaboration (with Faithless'Maxi Jazz) to the AIDS cause and He's A Pirate, the contribution to the Pirates of the Caribbean soundtrack, with its circular keyboard patterns endlessly fizzing into the ether. Extra features only on dvd

The Sound Of Tiësto

Extra features only on dvd

On the road, Tracklisting
Music Video 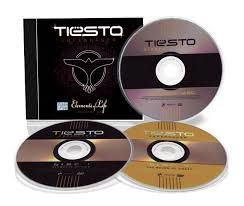