interview with Diane, big fan of Tiësto at 150 concerts in 10 years

Tiëstolive: How did you become such a big fan?
And your very first Tiësto concert ?

Diane: My 1st show was October 6, 2011 in Santa Barbara, California

At the time I thought it would be my 1st and my last. I really went because my best friend had passed away August of that year and I felt I needed to do something I normally wouldn’t do. I wanted to feel alive. I was feeling lost without my friend.

I always felt like I was a ambassador for Tiesto. I love ppl telling me their stories about Tiesto and wanting to know why I see him so much and why do I love him and only want to see him. I started seeing him when he started his new residency at Hakkasan 2013 I would visit my Mom and catch a Tiesto show. So that’s how that kinda happened not planned.

"The year I saw Tiesto

And I was seeing him a lot I started marking down when I saw him and that’s how counting shows happened.

Diane: Just by chance I was in Vegas and my niece who just recently turned 21 & had just moved back to Vegas from Calif. in 2012 wanted me to go out with her. The club we went to didn’t work out, so we ended up at XS and the advertisement as you walk in the club was showing Tiesto was going to be there the next weekend. I said oh no how will I come back next weekend to see him !? So I decided I would tell my husband I didn’t really get a chance to visit my Mom that much, she lived in Vegas from 1991 just after my Dad passed. That’s how I would go back to Vegas visit my Mom & see Tiesto. This is how I started seeing Tiesto up front, I went back the next weekend and saw him at Encore Beach Club. Because we had a moment when he played "Heiress of Valentina", he only played a snippet this is the part ...

So at the end of the show he was trying to hand me a cd but people kept trying to grab it from him so he tried again and I said to the people around me he was trying to give it to me, then everyone was making sure he could give it to me. I was crying so in shock he gave out only 1 cd and he gave it to me !!!!! Club Life Vol 2 Miami signed by him too. Wow I was hooked !!! And that’s the 1stX I did a b2b he was playing again the next night at XS. So of course I went.

I hadn’t made plans to attend Club Life #500 (Amsterdam 2016) ...
Thank goodness for the Belgium fans especially Frederic Noel. He told me not to worry they were going to send me a ticket for the show so I could attend

I left the United States for the 1stx to see Tiesto in 2016 for Club Life #500 that was my show #101. When I celebrated my show #100 in September 2016 at Wet Republic. I hadn’t made plans to attend cl#500 after I made flight & Hotel arrangements I found out the show was sold out. Thank goodness for the Belgium fans especially Frederic Noel. He told me not to worry they were going to send me a ticket for the show so I could attend. His biggest fans from Belgium Frederic, Steve, and Fabrice Lepage. I know Tiesto knows these guys has seen at many shows in Europe and Frederic & Fabrice (Tiësto Belgium) have traveled to Vegas to see him at Hakkasan "October of 2014 Tiesto shop had a contest to win a black sweater and a red sweater that Tiesto had worn at different shows. I entered of course. And to my surprise I won the red one" 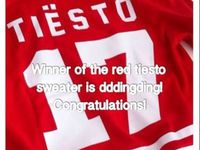 Tiëstolive: Of the 150 concerts, which one was better and worse for you?

Diane: The are No Bad Shows seeing Tiesto The greatest times of my life have been attending his shows. The fans I have met over the years are a very special part of being a Tiesto fan. Knowing them only on social media 1st then meeting them in person. Is absolutely one of the best parts ever, that’s exactly what happened at CL#500 his Big fans from Belgium, Japan,France,Italy and throughout Europe.

Tiesto is loved by many and once you love him his fans love one other too. The Magik of Tiesto 👑🎧👐 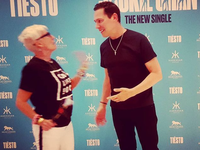 This was the 1stx I was right next to him. Some ppl from Australia invited me up to their VIP booth side at Wet they said they would take a picture of me with Tiesto behind me. Little did I know when I walked over he would extend his hand out to greet me. What a great memory, never dreaming I would have more with Tiesto.

The 1stx I officially met Tiesto

after his set at Wet.

I waited two hours for this chance.

Tiëstolive: Your top 5 albums and compilations

Diane: Top 5 albums is very difficult question to ask of any Tiesto fan. All of Club Life series, "A Town Called Paradise" 16 juin 2014, because I went to NY for the 1stx and only time just for his album release party. Then when he played those songs at Hakkasan after that, changed my emotions for hearing those songs from then on. Magikal Journey the hits collection, Kaleidoscope. And his label Musical Freedom puts out the sounds I love to hear.

Tiëstolive: You had a "Tiësto" car, how did the idea come about? Diane: Oh Yes the Tiesto Fan Car 🚗 I saw on Twitter someone had Tiesto’s bird logo on the window of their car, and someone else had his name on the hood of their car. I said I wanted something on my car his face, his bird logo too, did they get permission??? I couldn’t believe it when Tiesto responded back to me “You Have My Permission” so then it was going to happen thinking about wrapping my car, but I just wasn’t sure yet what I wanted. Was thinking about Club Life Vol 1 cover on the hood maybe the trunk, or maybe his headphones.

After permission from Tiesto I met up with the guy who was doing the wrap on my car. He was showing me different stock pictures from the internet, even through I had permission the guy was reluctant to do any picture that had copyrights. So that kinda stalled out the process of doing anything.

So the picture I chose is of Tiesto wearing the red sweater I won. For two reasons I picked it because of the sweater and because I was given the headphones from Tiesto the 1stx I saw him at his new Residency at Hakkasan 5-5-13 that picture was very personal to me for those two reasons.

So I showed the guy who was going to wrap my car he still was telling me I needed permission from the photographer before he could move forward. So I reached out to Tiesto’s photographer and he gave permission, but I also needed the picture sent from him to guy wrapping my car. I don’t understand but it had something to with the pixel number. So we waited for that to happen.

There was about a month delay I never received the picture to get to my guy to do my car.

So in mid November we were good to go. Permission ✅ picture sent ✅ picture received ✅

And now my guy wasn’t worried about getting sued for wrapping my car with a picture he didn’t have permission for.

With me in the picture is my good friend Dimitry he’s been with seeing Tiesto many times in Vegas because he lives there. I met him up front at Hakkasan seeing Tiesto in 2013 and with him is his friend Tisha.

Tiëstolive: Did a lot of people have to stop to look at her?

Diane: Yes I wish I would’ve taken pictures with every person who stopped me when getting in or out my car. Seeing lots of ppl pointing at my car while driving and see ppl taking videos too, I’ve met tons of ppl who love Tiesto. I would talk to people about their love and my love for Tiesto. Lot’s of questions does he drive in my car, do I work for him, do I get paid for having him on my car. Do I know him, does he know me, does he know about my car, has he seen it.

Diane: I would love to see Tiesto in Belgium with his big fan club there. Or really anywhere in Europe. Something very special seeing him out of the country.

Tiëstolive: The Tiësto Belgium, you are ok ?

Tiëstolive: Do you have a message for him?

THANK YOU, very much to Diane, a very, very, very big fan of Tiësto for 10 years, and it's not over! it was a great pleasure to read and layout on the site, so that all fans can get to know you better through your Fan life

if you haven't already, you can find Diane on her Instagram page